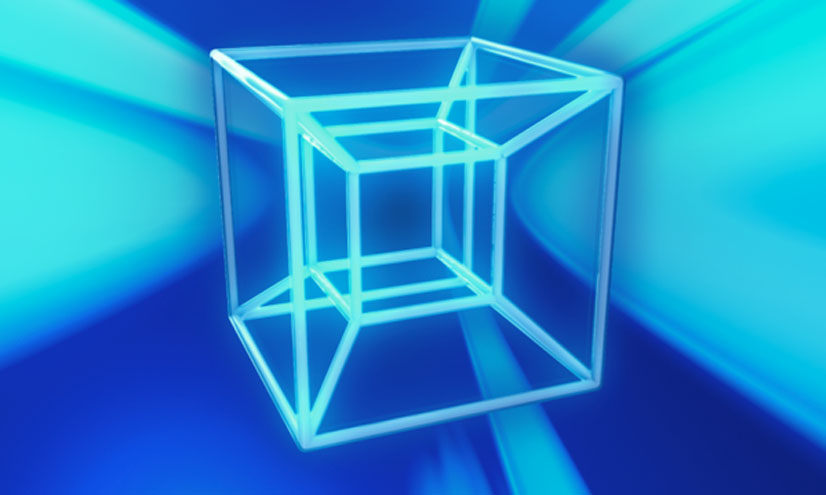 What do mathematicians imagine a space with four dimensions would look like? Discover the coordinates that are used to describe space, and how these extend to the 4th dimension.

We live in a three-dimensional space.

It's difficult to visualise, but the simplest description of the fourth dimension is that it is all space reachable by travelling at right angles to three-dimensional space.

The number of dimensions in a space tells us how many coordinates are needed to specify a point within that space.

In one dimension, only one coordinate is needed.

So a line is one-dimensional because just one coordinate, x, specifies a point on it.

In two dimensions the two coordinates x and y show the horizontal and vertical position of a point.

With three dimensions, the three coordinates, x, y and z, give the horizontal, depth and vertical position of a point.

The one-dimensional line had two obvious points at either end.

The sequence suggests that a four-dimensional object would have sixteen points where its lines meet called vertices.

The result is a hypercube, called a tesseract, with sixteen vertices, twenty-four faces, and thirty-two edges.

Every one of its edges is straight, and all angles between them are right angles, which is hard to depict with two or three-dimensional imagery.

But the fourth dimension's abstract nature hasn't stopped architects from trying to work with it.

In Paris, La Grande Arche was built with a resemblance to a tesseract.

Its peculiar structure gives us a glimpse into a four-dimensional world.