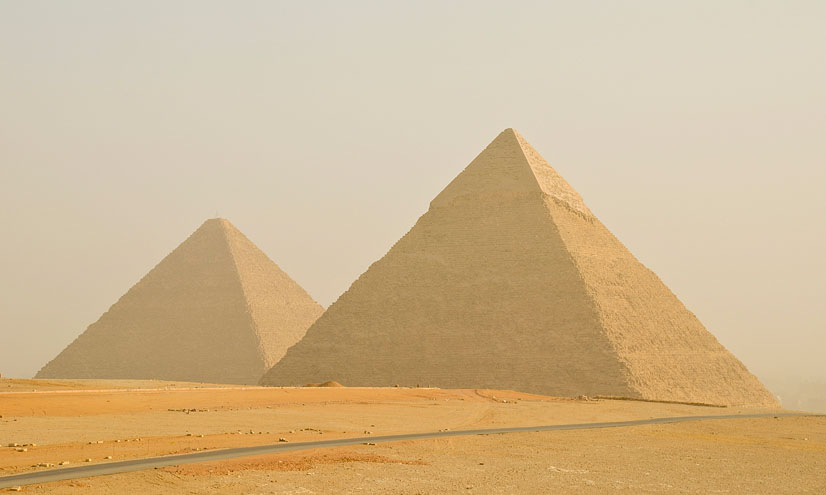 The use of 3-4-5 triangles in creating uniform right-angles and angles of incline in the ancient Pyramids of Egypt.

The design and build of each Egyptian pyramid was overseen by a royal master builder.

Charged with creating a symmetrical masterpiece, he had to find a way to create equal sides and angles without complex instruments.

It is thought that master builders might have relied on the inherent qualities of a certain type of triangle.

Called a 3-4-5 triangle, its sides always conform to this ratio.

And, crucially, it is always a right-angled triangle, with one corner measuring a precise 90°.

Because the Egyptians began the construction of every pyramid by creating a square base, 3-4-5 triangles were very useful.

They could ensure that a true square was formed with 90° corners, rather than a rhombus.

The base of the Great Pyramid at Khufu, for instance, was created from triangles measuring 21, 28 and 35 cubits – simply 3-4-5 triangles multiplied by seven!

It is not only the right angle in a 3-4-5 triangle which is fixed.

Both of the other angles are always the same.

This allowed master builders to ensure similar angles of incline throughout their pyramids.

When a perpendicular bisector cuts from the apex to the foundation of the Pyramid of Khufu.

Because the angle of incline for a 3-4-5 triangle is always 53.13°, the incline is therefore the same on both sides.

Most Egyptian pyramids have a 53° incline.

But not the Bent Pyramid.

Its angle of incline had to be lowered to just 43° in the upper section.

It is thought that the angle of incline was reduced because, part way through construction, the pyramid seemed unstable.

So the royal master builder had to revisit his design.