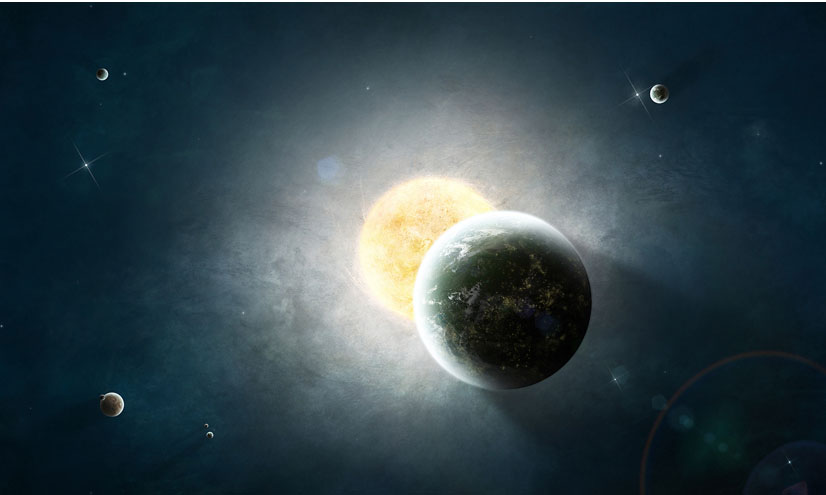 Discover how parallax can be used to measure distances, and how early astronomers used it to find the distance of stars from Earth.

Having two eyes is a big advantage for us when we perceive distances.

Try holding a pencil at arm's length so it covers the view of a nearby object.

By closing each eye in turn, the pencil seems to move.

This is because each eye looks at it from a slightly different angle.

This effect is known as parallax.

Your brain uses the distance between your eyes, known as the baseline, and the angles with the object, to instantly calculate the unknown distance.

Parallax:
Displacement of an observed object
Caused by a change in observational position
Measured from baseline

Parallax has been used to measure some of the greatest distances imaginable – the distances of stars from Earth.

Just like the pencil to our eyes, over time, a near star will seem to shift its position against stars that are farther away.

This parallax shift is because as the Earth moves along its orbit, the observation position changes.

The baseline between the observational points of an average adult's two eyes is just 6 centimetres.

Whereas Earth's orbit around the Sun can produce two observational points as far apart as a baseline of 300 million kilometres.

By taking pictures from Earth at these maximum observational points six months apart, astronomers can record how many degrees a star appears to have shifted in this time.

This is called the parallax angle, which because of the extreme distances of stars, is incredibly small.

But by creating a right angle triangle the astronomers know the baseline distance and two angles, and so have enough information to use trigonometry to calculate the distance of stars from Earth.

Much like the pencil experiment, yet on an immense scale.